Reswehera Raja Maha Viharaya is a beautiful attraction which is also frequented by large numbers of devotees throughout the year. Located in the North Western Province of Sri Lanka. This iconic site is quite frequently included in travel itineraries in the Cultural Triangle. You will be able to visit this beautiful old temple with great ease as you are traveling in the island with Green Holiday Centre. Reswehera Raja Maha Viharaya is believed to have been built by King Devanampiyatissa. He ruled the island between 307 BC and 267 BC. The beautiful statues which are found here enhance its appeal immensely. There is a Boo tree here which is believed to be a sapling of Jaya Sri Maha Bodhiya in Anuradhapura. Surrounding the temple you will find 99 caves which were used by monks for the purpose of meditation. The temple is located in very close proximity to the Aukana Buddha Statue. Some believe that the colossal standing Buddha statue that is found here was done as a practise before Aukana was created. Indeed, the two statues have quite a number of similarities. The Reswehera statue has a height of 39 feet and depicts Lord Buddha in Abhaya Mudra. But of course, Aukana Buddha Statue is considered to be of higher quality that the statue found in Rasvehera. Some even say that this statue is the one which is known as Rahera, which was a statue built upon the order of King Mahasen who ruled in the island between 276 and 303 AD. A large reclining statue of Buddha is also to be found in Reswehera Raja Maha Viharaya. This statue has a length of 39 feet. The robe of this statue seems to have been hand woven and pasted on the statue. It has then been plastered and painted. This beautiful feature makes the statue quite unique for sure! 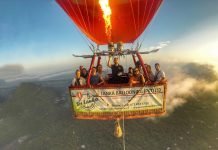 Kirivehera Temple is one of the most prominent sites of worship in Sri Lanka. Every year, large numbers of Buddhists visit this beautiful temple...

Nestled at the very heart of the screaming city of Colombo is an idyllic oasis of tranquility and beauty. Charm and class are to...