Sri Lanka is well known all over the world because of the incredible cricket stars that the country has birthed. Indeed, this small island nation has remarkable cricket fan base that follows matches religiously. There are plenty of impressive cricket grounds located all over the island, providing facilities for international games as well. Among these the iconic Galle International Stadium is quite prominent. History of The Galle International Stadium

The ground was built back in the year 1876. It was initially used as a race course. In the year 1927, it was formally declared as a cricket stadium. The very first test match was played here on the 3rd of June 1998 between the Sri Lankan and New Zealand teams. Galle International Stadium is regarded as one of the most beautiful stadiums in the world. The rolling waves of the Indian Ocean fringe the grounds on two sides while the grand Galle Clock Tower rises majestically in the distance. The venue is considered to be one of the luckiest grounds for the Sri Lankan cricket team as well! It is also home to the Galle Cricket Club. Galle International Cricket Stadium is the venue that hosted the last match of Muttiah Muralitharan, the legendary Sri Lankan bowler. The tsunami of 2004 which destroyed the coastal areas of the island reached and devastated the famed stadium as well. In the following weeks, the grounds were used to shelter the thousands of people who lost their homes in the awful tragedy. The stadium’s renovation project began on 8th May 2006. It was completed in 2007 and the grounds were opened by the then president Mr. Mahinda Rajapakse. When you are traveling in the region with Green Holiday Centre you will be able to easily visit this iconic venue and marvel at its surpassing beauty. If you are lucky you may even get the chance to watch a nail biting game of cricket during your visit! Devon Falls is one of the most beautiful waterfalls in the paradise island of Sri Lanka. It is a glistening body of water that...

How to Enjoy a Food Tour in Sri Lanka 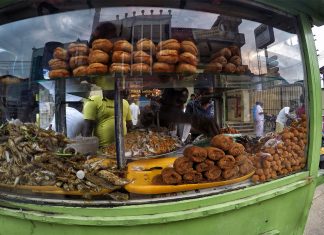 The spice island of Sri Lanka has some remarkable delicacies that will easily tantalize your taste buds. When you are traveling in this exotic...